A weak cold front brought us a lot of rain for a few days. Today is actually the first day it hasn't rained and the sun is shining. I love rainy weather and even more so when it's cold, but the temperatures only went down a little. As much as I like rainy weather, I hate driving in it, which I had to do to get to the day job.

So far we've had no more snakes in the house. Hubby fixed all the doors, getting rid of any possible places one could slither in through. Unfortunately though, one of the kitchen lights has been on every night since last Saturday. I'm leery about walking around the place in the dark.

The fur babies are a little jumpy, but that's probably my fault. They saw the snake as a plaything. i was worried they would get bitten before Hubby killed it. Both kitties are indoor babies. On a lighter note, Smokie did save me from a rather vicious looking leaf yesterday morning. LOL! 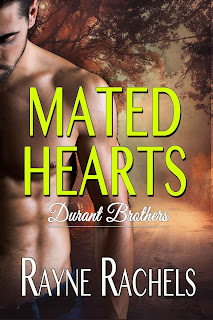 Mated Hearts has been out for a couple of weeks. It's the first of three books about the Durant Brothers finding their mates. I'm re-working the outline for the next book which is about Wes and his
mate. I wrote the outline a couple of months ago, but when I read over it last week, I saw some things I needed to fix and/or change. I'm trying a new outlining method.

Actually, it's not a new method, it's just one I haven't used before, though a lot of writers use it. Last night I laid out all my major plot points on index cards and almost immediately saw where I had a couple of issues. The goal for today is to finish re-working the outline so I can start writing tomorrow. I'm also going to set a release date and a cover reveal date. I will post info about the story under the "Current Projects" tab some time this week.

Besides writing book two in October, I plan to revise the outline for book 3 (Hank's story) and the outline for Phoenix (Brimstone Heat, Book 2). My list of stories for 2018 is growing.

With fall weather creeping in, I feel like I'm being re-energized. Fall and winter are my favorite times of the year.

Running on Caffeine: Saturday Night Scare and Other News

So far this morning, it's quiet. Earlier this month dove season opened and in the early morning hours, the pop of rifles could be heard from the fields behind us, especially on the weekend. Today is quiet.

It's been a crazy week! And last night I had a big scare...a snake in the kitchen, and not just any kind of snake. It was coral snake. For those of you who don't know about coral snakes, they are the second most poisonous snake. (Red and yellow...kill a fellow; red and black...friend of Jack.) The black mamba is number one.

This one was small, but not what I want to find in the house, especially when I'm turning off lights to get ready for bed. The lights were off in the kitchen, but the light from the living room was on so the kitchen wasn't in complete darkness. I was taking a cup to the kitchen when I saw the cats staring at something in the floor. At first I thought one of them had gotten hold of a colorful bracelet, until the "bracelet" moved and I realized what I was looking at. So glad I didn't walk in there and pick up the "bracelet" like was my first thought. My yelling there's a snake in the house brought Hubby running and he killed it. My HERO!

We think it came in through a very small gap between the door jam and the back door. It was a small young coral snake so it could have fit. Today, Hubby is going to fix the gap and check the other two doors. We're hoping that was the point of entry and there's no gap between the walls and floor that we can't see. We are living in old air force staff housing that was built in the 40-50s at Hubby's work.

Last week while mowing, Hubby killed a small coral snake outside. Now we've had the second one show up. I'm worried there may be more. Needless to say, I'm turning on lights before I walk into a room at night.

Luckily neither cat was bitten. But they were jumpy for a while until they finally settled down.

Mated Hearts, the first of the three Durant Brothers stories, released last Tuesday. This is Forrest's story. I'm excited about it!

I'm revising the outline for the next Durant Brothers story which will be about Wes. I haven't set a release date. If my writing schedule holds out, I hope to release it sometime in late November.

As always, I'm continuously working on outlines for other stories in the different series, and have notes for new series too.

Have a great day. I'm off to venture into the kitchen for more coffee. Wish me luck!

Yesterday is not ours to recover,
but tomorrow is ours to win or lose.
--Lyndon B. Johnson


Rain
I've always loved the sound of rain, especially at night. I don't love the sound of rain on the roof where I'm currently living. The rain hits a plastic layer that makes it sound like its raining inside the house. You can hear the squirrel run across the roof. That was a little unnerving the first time I heard that sound.

Crackle of a fire
Sitting outside on a cool evening around the fire pit, listening to the crackles and pops of the fire is another sound I enjoy.

Coffee maker in the morning.
It means coffee is on the way! It's enough to make your mouth water.

Wind chimes
The soft twinkle mixing in with the sounds of the trees swaying in the breeze on a warm evening is another sound I love to hear.

The scratch of a pen on paper as I write...
This is a favorite sound to hear as I create a new story. It's an old sound that makes me feel connected to the writers of the past.

Once you replace negative thoughts
with positive ones,
you'll start having positive results.
--Willie Nelson

So far this year, I've managed to stay away from the school supply sales. Honestly, I don't need anymore notebooks than the one I've already bought. I have plenty of notebook paper. But pens? That may be a problem. I love the Pilot pens. They are my 'go to' pen.

There's nothing like having a pack of new pens and the crisp, white paper in a new notebook begging for a story to be written on it.

I've been good about buying school supplies but craft stores are creating whole knew problem especially Michael's. I love stickers and planner stuff, and now they have out all of the Halloween stuff. I love it! I want it...all of it! I was there earlier this week. I just couldn't help myself. I bought some Halloween stickers and washi tape for my planner/bullet journal. It was a difficult choice between the different Halloween themed washi tapes. October in my bullet journal is going to be filled with Halloween stuff.

Yes, I put stickers in my bullet journal. September was my month to experiment with weekly sticker sets. Next month, I'm going to come up with a different weekly spread. Not sure what yet, but I've been looking around Pinterest and Youtube for inspiration.

With visions of Halloween and all things pumpkin, the feeling of fall is in the air and some of my September weekly spreads. The first 'cold' front made it's way here a couple of days ago. We've had cool mornings and nice days in the 80s. Next week, it's supposed to get back into the 90s. The taste of fall was a huge tease. I'm so ready for cold weather to get here.

What I'm Thankful For and Other Random Thoughts

Thankful for...
With the remnants of Hurricane Harvey still reeking havoc on people's lives, I'm thankful that I made it through the storm. Here in San Marcos, we had lots of rain and wind. Some streets were flooded, but not as bad as it could have been. In my area, several trees were blown down and limbs were scattered everywhere. I've never seen a tree blown over, breaking at ground level but I saw my first one after the storms passed. I have seen trees uprooted and snapped in half but never one that snapped in half at the ground.

I'm thankful for everyone who has made efforts to help the victims of Harvey.

Over the next few months we need to remember that help will still be needed. Homes, schools, businesses and roads will have to be rebuilt. But first, debris has to be removed and disposed of in order to rebuild.

Writing...
I'm waiting for Forrest's story to be returned to me so I can start what is hopefully the last round of edits. I have the cover and plan to have a title and cover reveal as soon as I set up everything for pre-order. I had to change the original title because another book was recently released with the same title I had planned to use. It happens. Yes, I could have probably used the same title but I decided to come up with a new title for my story. I didn't want any confusion, or at least as little as possible.


Pumpkin Spice...
I need a recipe for pumpkin spice coffee. I absolute love the stuff, but I have to find something low to no sugar. The other problem is that it can't have sucralose or aspartame in it. I have reactions to both of the artificial sweeteners. So far stevia and monk fruit are the only two "no calorie" sweeteners I can tolerate, but I always have to make sure they don't have anything mixed in with them.

I've started looking on-line for a recipe, but I'm always leery about trying new stuff without recommendations. I want something that tastes like pumpkin spice but doesn't have a long list of ingredients.

Fall Fever is hitting me.