Over the years, I have pre-ordered quite a few books.

I have pre-ordered other books from Amazon. As an indie author, I have wished to have that option available for my books. The big publishers have had this option for years, and a select few indie authors have had pre-orders available to them for a shorter time.

Yesterday, I received an email from Amazon KDP announcing that KDP authors now have this option available to them. I am excited about this!

Obviously, there are requirements we authors must follow in order to use this option.

There are advantages to the pre-order option.


So, what does this mean for me, the author?
I need to re-arrange my writing schedule and calendar so I can incorporate pre-sales for my future books.
I will be able to tell you an exact release date at Amazon. (Sorry, Bryant Station Curves Book 4 will be out at the end of this month. No pre-orders.)

I believe this will be a win-win situation for all of us.
Do you like the idea of pre-ordering a book and having the specific release date?

This is it!!!
After this week, the Blog Tour for Reluctantly Undead is over.

August 12
For the Love of Books

8 Stops on the Blog Tour 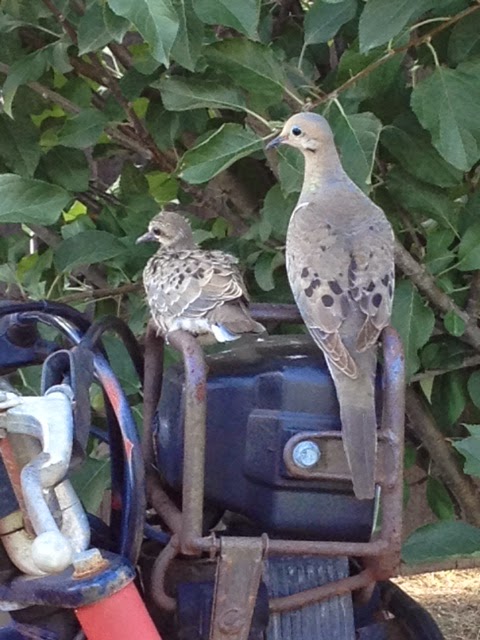 The doves have been nesting in my neighborhood.

Years ago, before the land was sold to developers, was a huge farm. During dove season (when doves are hunted), hunters flocked the area because of the huge numbers of dove here.

The farm is gone, and the area is a huge residential neighborhood, but the doves are coming back in large numbers. They are nesting in the trees people have planted.

This is in my backyard by one of my apple trees.

Email ThisBlogThis!Share to TwitterShare to FacebookShare to Pinterest
Labels: picture

These lines come from the poem, To a Mouse, written in 1786 by Robert Burns.

The poem was written as an apology to mouse.
The title for John Steinbeck's novel (1937) Of Mice and Men comes from this poem.

The lines tell us that even though we carefully craft our plans, things can happen that cause our plans to stray or go wrong.

I working on book 4 in the Bryant Station Curves series. This story is about the twins Todd and Harrison Anderson. Todd is the sheriff of Bryant Station. His twin has made an appearance in a couple of the books. He is a paramedic. Some people call him an EMT (Emergency Medical Technician),  but for Harrison, that classification is wrong. He is a paramedic and holds several certifications.

The book will be released this month. The release date has not been set. My writing plans/schedule went awry.

A few weeks ago, DH (Dear Hubby) went to see his cardiologist, and was put through a series of tests. Problems were found and the next thing we knew, DH was in the cath lab having stints placed into collapsed arteries. We have round three with the cath lab coming up in a few days. Hopefully, this will be the last one, at least for awhile. It's been stressful and scary, especially with the fact DH is only in his forties.

On a brighter note, the Blog Tour for Reluctantly Undead is still going. We have another week and a half to go. If you haven't, check out the stops. At several, I have written guest posts. I want to thank Shelly at Fire and Ice Book Tours. She has done a wonderful job of organizing everything. Thank you!

What are my plans after Bryant Station Curves book 4 comes out?

As always, my ideas book is overflowing. I have four more books planned for Bryant Station Curves (not counting book 4). I have plans for a spin-off series revolving around the Wolf pack from Abby's Heart. I have a family tree created for the family, and I'm jotting down ideas.

I'm playing with the idea of a spin-off for Tara's cat shifting in-laws (Chasing Tara). I have a partial family tree started for the main family and ideas written down.

Ideas for book 2 in the Reluctantly Undead series are also being written down.

Too bad I can't tilt my head and let the stories pour out into the word processing program. LOL!