It's amazing, but we are already a week into December and already this month has been crazy. 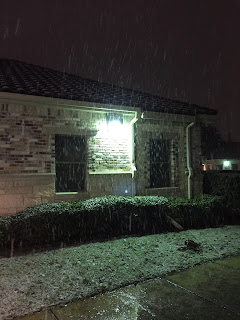 We had our first actual taste of cold weather here in Texas and Mother Nature decided to show us what she could do when she feels like it. We actually had snow! Now, I know those of you who get snow every winter are thinking this is not a big deal. But in Texas, especial San Antonio, New Braunfels, and San Marcos areas (and all between), we don't get snow. We got it Thursday night! San Antonio got almost 2 inches of snow. I think 1985 was the last time they actually got that much snow.
Most winters, if we get snow, it's just a light dusting that typically melts as soon as it lands.

This photo is what it looked like when I first found out it was snowing. This was at the cardiovascular clinic where DH was having another heart surgery. The doctor found a blockage, but was able to break it. We were lucky that DH hadn't had a heart attack because of the blockage. I've had my Christmas miracle.

We got through DH's surgery, but by the time he is released to go home, it's really snowing. The car was covered. And the worse part, I've never driven in snow...like most Texans. 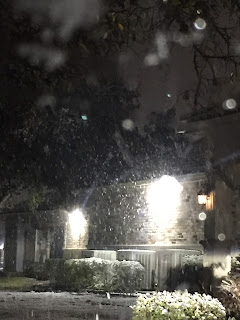 This is what it looked like from the car after DH was released.

The drive home (about 50 miles) was slow and scary for me. But we made it home. I can honestly say I have no desire to drive in snow again, especially at night. I could barely see some of the roads in San Antonio because there were no lights. And the interstate was crazy.

I'm so thankful that DH is okay and safely home. If you've been following me, you know his health has been an issue for several years now.

In other news, I'm working on Wes and Emma's story (Durant Brothers #2). It's been a little slow, but hopefully now I can get it finished.

I'm also organizing all my notes and outlines (in varying stages of completion) so that I can start my list of what I will be writing next year. I'm also organizing, or trying to, my project notebook and bullet journal.

Have a wonderful weekend.