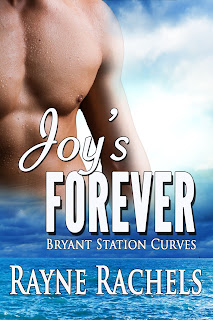 
Joy Anderson is different from the other shifters in Bryant Station. She and her cave bear have died and been reborn more times than she can count.  In each life, she has longed for her mate and a family, but lies and her insecurities have kept her running from her mate.

Joy stared at Theo. Hunger and need swept through her. Over the years she had gotten really good at avoiding him because she couldn’t handle the thought of him not wanting her the way she wanted him, but since he had taken up residence in Bryant Station, she hadn’t been so lucky. Every time she turned around, Theo was there. She told herself to just ignore him because he had made a family with someone else, but her body refused to listen. Her heartbeat sped up until she thought it would pound its way out of her chest. Her body warmed and it wasn’t because she was blushing with embarrassment. She wanted him. There was no way around that fact or the fact he was her mate and the only man sent her desire into overtime with just a look.
“How are you doing, Joy?” asked Theo.
Joy bit her bottom lip as his deep voice swept over her leaving a burning desire in its wake. She hated the fact every shifter in the room, including her brother, could smell the desire and need radiating from her. Joy plastered a smile on her face. “I’m fine.” She felt her cheeks grow warm.  “I’ll be right back with a cup of coffee for you, and then I’ll take your orders.” She turned without waiting for either man to say anything and retreated to the counter.
Theo watched Joy walk away. Yup, she was still trying to avoid him, even though she wanted him as much as he wanted her.
“What the hell is going on between you and my sister?” Skylar growled at Theo.
Theo looked at the man sitting across from him. “You, of all people, know you should not growl at me.”
Posted by Rayne Rachels